The Kiss of Deception – Book one of the Remnant Chronicles by Mary E. Pearson

Buy it on Amazon: Here

The Remnant Chronicles have been on my TBR for quite some time now. When a read along was posted with some fellow Bookstagrammers I jumped at the chance to join one for the first time. 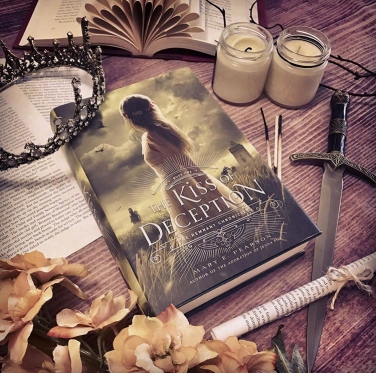 We are first introduced to Lia the Princess and First Daughter of Morrighan as she prepares to flee from her arranged marriage to the Dalbreck Prince. She and her lady in waiting escape to a beautiful seaside town to try and start their lives over where unbeknownst to Lia she meets the Prince she was meant to marry and the Barbarian Assassin who was sent to kill her.

There are a lot of pieces to the world that you are introduced to early on in the book without explanation such as the First Daughters, Gifts, and the concept of the Ancients and the Gods. I was constantly on the lookout for more information and answers to my questions. While I didn’t get all that I was looking for in the first book there were certainly a lot of gaps filled in, the author has a very “all things in due time” writing style. I know this can be frustrating for some readers but I really enjoy the way she keeps me on the hook and wanting to know more.

In a society steeped in tradition, Princess Lia’s life follows a preordained course. As First Daughter, she is expected to have the revered gift of sight—but she doesn’t—and she knows her parents are perpetrating a sham when they arrange her marriage to secure an alliance with a neighboring kingdom—to a prince she has never met.

On the morning of her wedding, Lia flees to a distant village. She settles into a new life, hopeful when two mysterious and handsome strangers arrive—and unaware that one is the jilted prince and the other an assassin sent to kill her. Deception abounds, and Lia finds herself on the brink of unlocking perilous secrets—even as she finds herself falling in love.

Have you read the Remnant Chronicles or Dance of Thieves? Tell me what you think of them below in the comments.

What is one of your favorite 2021 reads?
Which Grisha order do you belong to?
Do you enjoy books centered around car or motorcycle clubs? If so, what are some of your favorites?
Predictive text: Some Days are _______
🩸Surprise Cover Reveal 🩸
What is on your May TBR?
blog book blog Book recommendation book review Book Reviews books fantasy fiction good reads reading review Reviews romance unboxing ya fantasy
Loading Comments...
Comment
×
%d bloggers like this: