So May 7th has turned into the release day of the year apparently! There are so many amazing books with extras that I cannot wait to come out.

After listening to Illuminae (which I reviewed earlier this month, check it out here) anything done by Amie and Jay will be an automatic buy for me! Not to mention the early reviews for this book have been phenomenal.

The year is 2380, and the graduating cadets of Aurora Academy are being assigned their 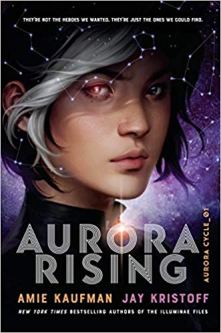 first missions. Star pupil Tyler Jones is ready to recruit the squad of his dreams, but his own boneheaded heroism sees him stuck with the dregs nobody else in the Academy would touch…

A cocky diplomat with a black belt in sarcasm

A sociopath scientist with a fondness for shooting her bunkmates

A tomboy pilot who’s totally not into him, in case you were wondering

And Ty’s squad isn’t even his biggest problem—that’d be Aurora Jie-Lin O’Malley, the girl he’s just rescued from interdimensional space. Trapped in cryo-sleep for two centuries, Auri is a girl out of time and out of her depth. But she could be the catalyst that starts a war millions of years in the making, and Tyler’s squad of losers, discipline-cases and misfits might just be the last hope for the entire galaxy.

They’re not the heroes we deserve. They’re just the ones we could find. Nobody panic.

AND OH MY GOODNESS THE PRE ORDER OFFER FOR THIS BOOK: 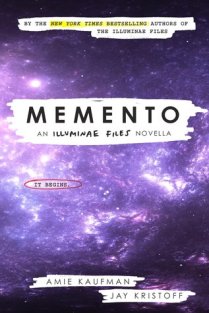 December, 2574. Forty-three days before the BeiTech attack on Kerenza IV.

This is the story of my first friendship.

This is the tale of my first murder?

Some monsters are born. 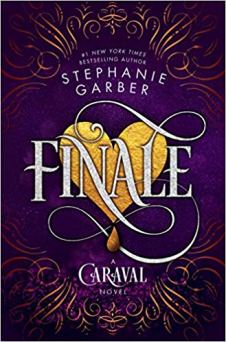 This is one of very few series that I have read as they release and I cannot wait for this book!!!!! I am not a huge person for having multiple editions but I have ordered both the Fairyloot Special Edition box and the OwlCrate Special Edition box… and most likely going to have to get the Barnes & Noble Exclusive for the extra chapter from Legend’s perspective. If you haven’t already I highly recommend reading this series, they are a super fast paced and fun read!

Welcome, welcome to Caraval…all games must come to an end.

Meanwhile, Scarlett has started a game of her own. She’s challenged Julian and her former fiancé, Count Nicolas d’Arcy, to a competition where the winner will receive her hand in marriage. Finaly, Scarlett feels as if she is in complete control over her life and future. She is unaware that her mother’s past has put her in the greatest danger of all.

Caraval is over, but perhaps the greatest game of all has begun―with lives, empires, and hearts all at stake. There are no spectators this time: only those who will win…and those who will lose everything. . .

I read the first several books in this series and enjoyed them. I just started to get a bit behind and have not had a chance to catch up. I will probably do a full reread and knock the whole series out once complete since I have lost track of a lot of the details.

My name is Mercedes Athena Thompson Hauptman, and I am a car mechanic.

And a coyote shapeshifter . . . And the mate of the Alpha of the Columbia Basin werewolf pack.

Even so, none of that would have gotten me into trouble if, a few months ago, I hadn’t stood upon a bridge and taken responsibility for the safety of the citizens who lived in our territory. It seemed like the thing to do at the time. It should have only involved hunting down killer goblins, zombie goats, and an occasional troll. Instead, our home was viewed as neutral ground, a place where humans would feel safe to come and treat with the fae.

The reality is that nothing and no one is safe. As generals and politicians face off with the Gray Lords of the fae, a storm is coming and her name is Death.

But we are pack, and we have given our word. We will die to keep it.

The history books say I died.

They don’t know the half of it.

Anastasia “Nastya” Romanov was given a single mission: to smuggle an ancient spell into her suitcase on her way to exile in Siberia. It might be her family’s only salvation. But the leader of the Bolshevik army is after them . . . and he’s hunted Romanov before.

Nastya’s only chances of survival are to either release the spell, and deal with the consequences, or enlist help from Zash, the handsome soldier who doesn’t act like the average Bolshevik. Nastya’s never dabbled in magic before, but it doesn’t frighten her as much as her growing attraction for Zash. She likes him. She thinks he might even like her . . .

Nocturna (A Forgery of Magic #1) by Maya Motayne

Set in a Latinx-inspired world, a face-changing thief and a risk-taking prince must team up to defeat a powerful evil they accidentally unleashed.

To Finn Voy, magic is two things: a knife to hold under the chin of anyone who crosses her…and a disguise she shrugs on as easily as others pull on cloaks.

As a talented faceshifter, it’s been years since Finn has seen her own face, and that’s exactly how she likes it. But when Finn gets caught by a powerful mobster, she’s forced into an impossible mission: steal a legendary treasure from Castallan’s royal palace or be stripped of her magic forever.

After the murder of his older brother, Prince Alfehr is first in line for the Castallan throne. But Alfie can’t help but feel that he will never live up to his brother’s legacy. Riddled with grief, Alfie is obsessed with finding a way to bring his brother back, even if it means dabbling in forbidden magic.

But when Finn and Alfie’s fates collide, they accidentally unlock a terrible, ancient power—which, if not contained, will devour the world. And with Castallan’s fate in their hands, Alfie and Finn must race to vanquish what they have unleashed, even if it means facing the deepest darkness in their pasts.

While I was not a big fan of how this series ended I was a fan of the first few books so am really interested so see some extra content from this world. I have pre-ordered a singed Barnes & Noble exclusive version .

Return once more to the deadly and dazzling world of Red Queen in Broken Throne, a beautifully designed, must-have companion to the chart-topping series from #1 New York Times bestselling author Victoria Aveyard.

Fans will be delighted to catch up with beloved characters after the drama of War Storm and be excited to hear from brand-new voices as well. This stunning collection is not to be missed!

I got a chance to read an advanced eGalley of this book and I really enjoyed it, you can read my full review here.

In a world divided by meddlesome gods and treacherous oceans, only the Maarin possess the knowledge to cross the Endless Seas. But they have one mandate: East must never meet West.

A PIRATE WITH A WILL OF IRON

Teriana is the second mate of the Quincense and heir to the Maarin Triumvirate. Her people are born of the seas and the keepers of its secrets, but when her closest friend is forced into an unwanted betrothal, Teriana breaks her people’s mandate so her friend might escape—a choice with devastating consequences.

A SOLDIER WITH A SECRET

Marcus is the commander of the Thirty-Seventh, the notorious legion that has led the Celendor Empire to conquer the entire East. The legion is his family, but even they don’t know the truth he’s been hiding since childhood. It’s a secret he’ll do anything to protect, no matter how much it costs him – and the world.

When an Empire senator discovers the existence of the Dark Shores, he captures Teriana’s crew and threatens to reveal Marcus’s secret unless they sail in pursuit of conquest, forcing the two into an unlikely—and unwilling—alliance. They unite for the sake of their families, but both must decide how far they are willing to go, and how much they are willing to sacrifice.

We Hunt the Flame (Sands of Arawiya #1) by Hafsah Faizal

I am super excited for this book, and I have an educated guess that it will be in the May OwlCrate which means special edition!!!

People lived because she killed.

People died because he lived.

Zafira is the Hunter, disguising herself as a man when she braves the cursed forest of the Arz to feed her people. Nasir is the Prince of Death, assassinating those foolish enough to defy his autocratic father, the king. If Zafira was exposed as a girl, all of her achievements would be rejected; if Nasir displayed his compassion, his father would punish him in the most brutal of ways.

Both are legends in the kingdom of Arawiya—but neither wants to be.

War is brewing, and the Arz sweeps closer with each passing day, engulfing the land in shadow. When Zafira embarks on a quest to uncover a lost artifact that can restore magic to her suffering world and stop the Arz, Nasir is sent by the king on a similar mission: retrieve the artifact and kill the Hunter. But an ancient evil stirs as their journey unfolds—and the prize they seek may pose a threat greater than either can imagine.

Set in a richly detailed world inspired by ancient Arabia, We Hunt the Flame is a gripping debut of discovery, conquering fear, and taking identity into your own hands.

I have not yet read Furyborn but it is on my TBR for May before the release of Kingsbane, all of the early hype for this book has been amazing!

Rielle Dardenne has been anointed Sun Queen, but her trials are far from over. The Gate keeping the angels at bay is falling. To repair it, Rielle must collect the seven hidden castings of the saints. Meanwhile, to help her prince and love Audric protect Celdaria, Rielle must spy on the angel Corien—but his promises of freedom and power may prove too tempting to resist.

Centuries later, Eliana Ferracora grapples with her new reality: She is the Sun Queen, humanity’s long-awaited savior. But fear of corruption—fear of becoming another Rielle—keeps Eliana’s power dangerous and unpredictable. Hunted by all, racing against time to save her dying friend Navi, Eliana must decide how to wear a crown she never wanted—by embracing her mother’s power, or rejecting it forever.

Share something positive with me today! Can be anything good book, new book, not book related. Let’s just spread some joy!
“But would it really hurt?
What upcoming releases are you excited for?? I feel like so many books are dropping in the next two weeks, my tbr doesn’t even know what to do with itself!
PSA: The cover for WHAT IF by @authornicolefiorina is here on RELEASE DAY! Meet Ty and Kate in a fast-pace short story set in NYC, and the perfect cure to get you out of a reading slump. Free on KU!
I don’t know about you but sometimes I just fall in love with a books aesthetic, Gothikana was definitely one of those for me. What books did you just fall in love with the location or vibes?
What are you reading this week?
blog book blog Book recommendation book review Book Reviews books fantasy fiction good reads reading review Reviews romance unboxing ya fantasy
Loading Comments...