I was a massive fan of the Raven Cycle by Stiefvater and as soon as I finished it I started trying to devour everything written by her. The Wolves of Mercy Falls popped up as a Scribd suggestion so I went for it! 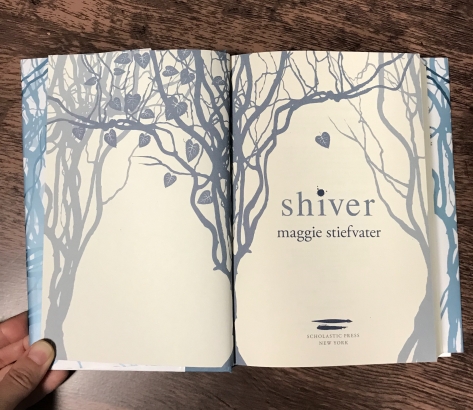 The first book in the series is Shiver and while it is a very different type of story from the Raven boys I loved it all the same. One of my favorite things about Stiefvater’s writing is how all of the people and little details always end up being important… and it may not come back around to even register until much later. The love story that she weaves between Sam and Grace is wonderful and all of the twists and turns that the story takes are on that “hurt so good” level. The author even said in an interview that she set out to make her readers cry and she delivered! The book switches back and forth between each of their points of view throughout.

For years, Grace has watched the wolves in the woods behind her house. One yellow-eyed wolf—her wolf—is a chilling presence she can’t seem to live without.

Meanwhile, Sam has lived two lives: In winter, the frozen woods, the protection of the pack, and the silent company of a fearless girl. In summer, a few precious months of being human… until the cold makes him shift back again.

Now, Grace meets a yellow-eyed boy whose familiarity takes her breath away. It’s her wolf. It has to be. But as winter nears, Sam must fight to stay human—or risk losing himself, and Grace, forever.

A Pack of Blood and Lies was a fast paced read that pulls you right it, no struggling to get hooked here! You are left wondering what will happen to Ness next from the get go as her Werewolf family comes to force her back to Colorado after the passing of her mother. Ness has all the makings of the fierce female lead set out to avenge her family and teach the backwards pack a lesson, but her reckless streak lands her in more trouble than she started out with…. Thankfully the steamy Liam always seems to be there to save the day. Yes, it’s a little cliché but has all the juicy tidbits that keep you coming back for more along with a few twists and turns you don’t see coming. I do wish more detailed physical descriptions of characters was provided up front. Its left to the imagination in the beginning so my mind formed its own descriptions to find out later in the story that person appeared differently. This story wraps up just enough to leave you satisfied but ready to dive into the next installment. I would have started reading to sequel right away!

The primal rule of winning: don’t fall in love with the contender.

Three months shy of her eighteenth birthday, Ness is forced to return to Colorado. Even though it’s been six years, and the wolves of her all-male pack don’t recognize her, she recognizes them. People who shun others because of their gender are hard to forget.

Especially Liam Kolane–son of Heath, the crudest and cruelest Alpha to have ruled the Boulder Pack. Liam is as handsome as he is infuriating, as kind as he is punishing, and he makes Ness’s traitorous heart race, which isn’t good. After all, he’s a Kolane. Like father like son, right?

When Heath dies, Liam vies to become the new Alpha and no one dares challenge him.

A Pack of Blood and Lies does not release until April 30th but is available for pre-order now!

Thank you to NetGalley and Twig Publishing for the opportunity to review this ARC for my honest opinion.