This is the first book in the Witchlands series and I have seen a ton of hype around the third book in this series releasing so I wanted to check it out… and of course determine if I wanted to order and of the special editions 🙂 This being the first book in the series there was a lot of world building to be done. High level it is a world where everyone has a form of “witchery” and there many different kinds. The world was once vibrant and had great magic thanks to the “Origin Wells” which have all but died over the course of time. While there is a lot of world building being done you are not given too much information up front, you have to keep reading to find out what things really mean. The story is centered around Iseult and Safi, but there are numerous other characters that are key to the story and are slowing building the back stories as well. 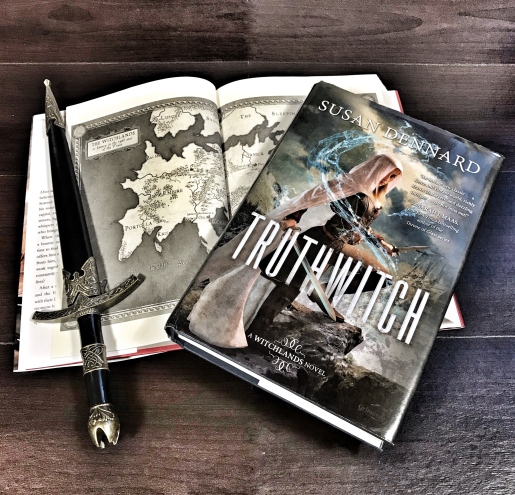 Because there was some lack of understanding and meaning to some of the elements this book was a little challenging for me to really take a hold of in the beginning. I would say about half way through I was starting to understand the character and world dynamics it really started to pick up.

Once problem I had in the writing was the action scenes. I tend to read quickly and sometimes I have to go back and reread a section to get the details. I just feel in some scenes the details were lacking. I was having a hard time picturing how they were moving together or fighting. A few times I caught myself internally thinking “How did they end up like that?”.

There was so much that was left shrouded in mystery in this book. Most of the characters are really still in a morally grey area, and you aren’t even sure who the “big bad” guy is. I gave the overall score for this book 3 out of 5 stars for its slow start and lack of information. Understanding that this is taking this book as a standalone and that once complete with the overall series I might have a very different opinion.

That being said even though this first book was only 3 stars I will continue to read the series. I think the author has a lot of great concepts started and I would really like to find out what she does with them… and who ends up being what in the story line.

“In a continent on the edge of war, two witches hold its fate in their hands.

Young witches Safiya and Iseult have a habit of finding trouble. After clashing with a powerful Guildmaster and his ruthless Bloodwitch bodyguard, the friends are forced to flee their home.

Safi must avoid capture at all costs as she’s a rare Truthwitch, able to discern truth from lies. Many would kill for her magic, so Safi must keep it hidden – lest she be used in the struggle between empires. And Iseult’s true powers are hidden even from herself.

In a chance encounter at Court, Safi meets Prince Merik and makes him a reluctant ally. However, his help may not slow down the Bloodwitch now hot on the girls’ heels. All Safi and Iseult want is their freedom, but danger lies ahead. With war coming, treaties breaking and a magical contagion sweeping the land, the friends will have to fight emperors and mercenaries alike. For some will stop at nothing to get their hands on a Truthwitch.”

On another fun note I did read that it was announced in September that the series was optioned by Jim Henson Company for a TV series!!  Link to article

BloodWitch the official 3rd book in the series (there is a 2.5 Novella) Releases on February 12th 2019.  I will have to see how the sequel Windwitch goes before I decide if I want to pre-order or grab any special edition boxes.

When you travel how many books do you take with you? Or do you only take ebooks or audiobooks?
What new releases are on your radar this week?
If you could visit any bookish place where would you go?
Do you have a dedicated space for your books or is it shared with other people/spaces? Anyone else’s home library always seem to be a mess?
What is a book(s) that you keeping hearing people rave about?
Are there any books you can recommend to pretty much anyone?
blog book blog Book recommendation book review Book Reviews books fantasy fiction good reads reading review Reviews romance unboxing ya fantasy
Loading Comments...
Comment
×
%d bloggers like this: