I am so excited to be a part of the reveal of this incredible cover for DEAD ROCKSTAR, by Lillah Lawson!

Synopsis: Stormy Spooner is at her wits’ end. Careening towards bitter after a nasty divorce, she sometimes wonders what her life is becoming.

After unearthing a cryptic set of lines from a dusty album cover, Stormy tries the impossible: to resurrect Phillip Deville, enigmatic former frontman of the Bloomer Demons. Stormy’s love for her favorite dead rockstar knows no bounds…but it was all supposed to be a joke.

When she answers a knock on her door the next day and finds herself face to face with the dark-haired rock god of her every teenage fantasy, her entire world is turned upside down.

Turns out, she’s awakened more than just Philip, and Stormy will have to do battle against a cast of strange characters to keep herself and her new undead boyfriend safe.

Dead Rockstar is set to release November 3rd, 2020 by The Parliament House Press. Dont forget to add to your Good Reads TBR.

Guys I am so excited to be a part of the reveal of this gorgeous cover for for THE SEEKING, by Marlena Frank! 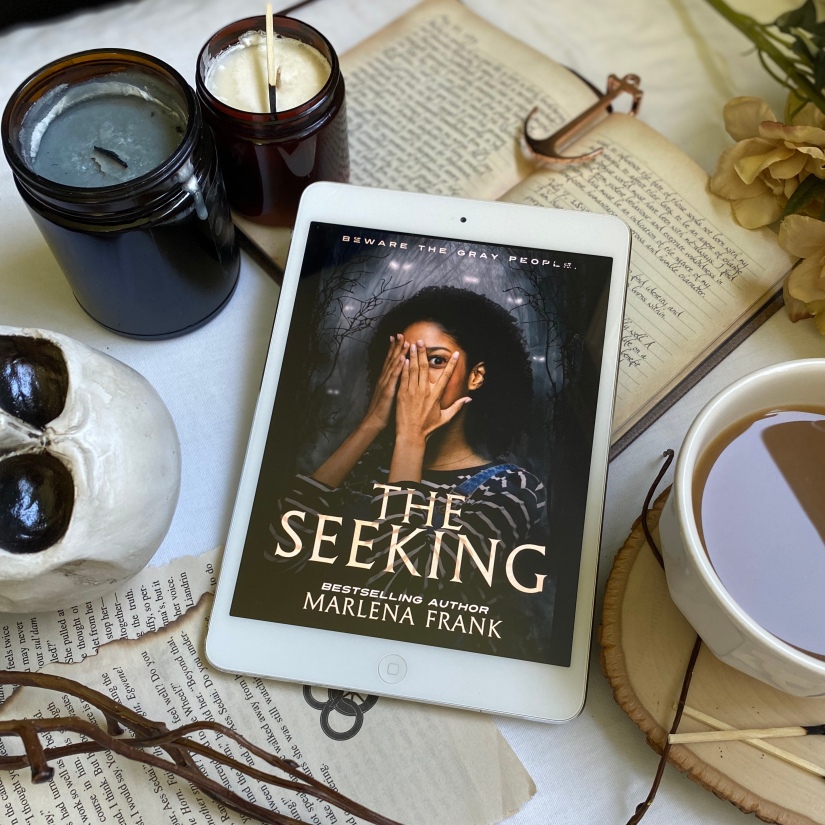 Synopsis: ” Each Seeking, the magic that protects the town of Carra must be renewed, which means the children of the Exalted Family must go into hiding. Whether it be through disguise or bribe, through trusted friends or perfect hiding places, every child of the Priest family must avoid capture for the full day.

When things go wrong with the renewal, it’s up to seventeen-year-old Dahlia, the middle child of the Priest family, and her girlfriend, Bisa, to escape Carra and find the magical beings responsible for the protection. They must learn who would require such a cruel game to be played every year and if the protection of the Gray People is really worth such a deadly cost. What they will discover is far worse.”

The Seeking is set to release October 27th, 2020 by The Parliament House Press. Dont forget to add to your Good Reads TBR.

Guys I am so excited to be a part of the reveal of this amazing cover for VAMPIRES OF PORTLANDIA, by Jason Tanamor! Don’t forget to add to your Good Reads TBR.

Vampires of Portlandia is set to release September 29th, 2020 by The Parliament House Press.

“When Marcella Leones relocates her family of vampires from the Philippines to Portland, Oregon, she raises her grandchildren under strict rules so humans will not expose them. Her only wish is to give them a peaceful life, far away from the hunters and the Filipino government that have attempted to exterminate them.

Before she dies, she passes on the power to her eldest grandchild, Percival. He vows to uphold the rules set forth by Leones, thus allowing his family to roam freely without notice. After all, they are monsters.

However, when the murder rate in Portland rises drastically, Percival suspects that his younger brother, Roger, is responsible. Along the way, they discover that there are other breeds of monsters – werebeasts, witches, ghouls, and viscera – who have been residing in Portland for years.

Who is behind the murders? And why? Along with sensie, Penelope Jane, Percival must find the truth.

Based on Filipino folklore (aswang), “Vampires of Portlandia” is a fantastical tale of different monsters coexisting in the weirdest city in America.”

Guys I am so excited to be a part of the reveal of this gorgeous cover for SAINT OF PAIN (Vile Sacraments Series book 2), by Kali Rose Schmidt!

Saint of Pain is set to release September 15th, 2020 by The Parliament House Press.

What is a book on your tbr that you plan on reading soon?
What is a series do you need to catch up on or finish?
What was the last audiobook you listened to?
He's not just one villain. He's three… Triple Threat by @authorkwebster is now LIVE!
How do you plan and keep track of your reading for the year?
What books have been on your TBR the longest?
blog book blog Book recommendation book review Book Reviews books fantasy fiction good reads reading review Reviews romance unboxing ya fantasy
Loading Comments...