I am so excited to be a part of the reveal of this incredible cover for DEAD ROCKSTAR, by Lillah Lawson! 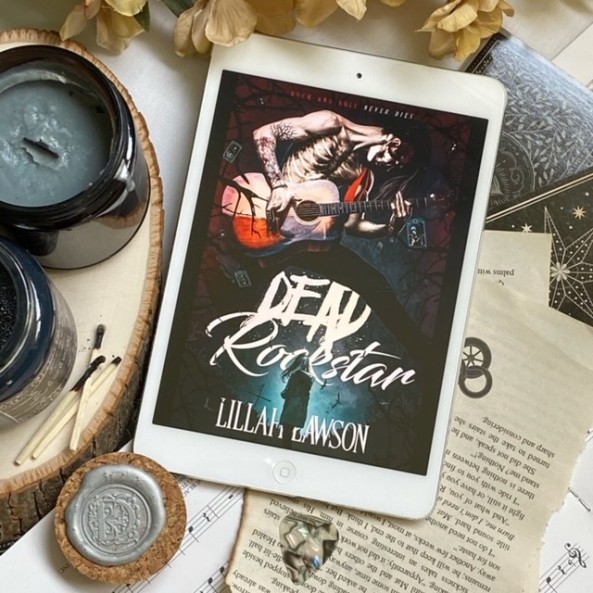 Synopsis: Stormy Spooner is at her wits’ end. Careening towards bitter after a nasty divorce, she sometimes wonders what her life is becoming.

After unearthing a cryptic set of lines from a dusty album cover, Stormy tries the impossible: to resurrect Phillip Deville, enigmatic former frontman of the Bloomer Demons. Stormy’s love for her favorite dead rockstar knows no bounds…but it was all supposed to be a joke.

When she answers a knock on her door the next day and finds herself face to face with the dark-haired rock god of her every teenage fantasy, her entire world is turned upside down.

Turns out, she’s awakened more than just Philip, and Stormy will have to do battle against a cast of strange characters to keep herself and her new undead boyfriend safe.

Dead Rockstar is set to release November 3rd, 2020 by The Parliament House Press. Dont forget to add to your Good Reads TBR.

Share something positive with me today! Can be anything good book, new book, not book related. Let’s just spread some joy!
“But would it really hurt?
What upcoming releases are you excited for?? I feel like so many books are dropping in the next two weeks, my tbr doesn’t even know what to do with itself!
PSA: The cover for WHAT IF by @authornicolefiorina is here on RELEASE DAY! Meet Ty and Kate in a fast-pace short story set in NYC, and the perfect cure to get you out of a reading slump. Free on KU!
I don’t know about you but sometimes I just fall in love with a books aesthetic, Gothikana was definitely one of those for me. What books did you just fall in love with the location or vibes?
What are you reading this week?
blog book blog Book recommendation book review Book Reviews books fantasy fiction good reads reading review Reviews romance unboxing ya fantasy
Loading Comments...