Hollow Heathens (The Tales of Weeping Hollow #1) by Nicole Fiorina 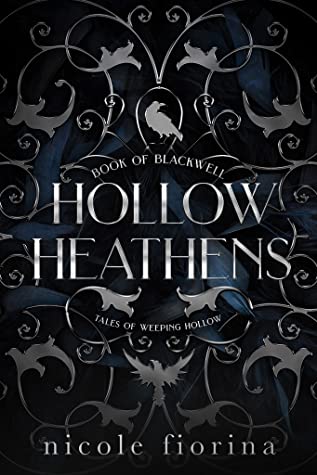 Guys you know I do not give out 5 star ratings lightly so was so pleasantly surprised when this book just blew me away. I have been on a huge dark romance kick and basically reading anything recommend by @ashhob1229 on Instagram. After hearing her rave about Hollow Heathens and Fallon and Julian I had to give it a shot.

I was also super excited to get back to some paranormal with my dark romance. The story starts out with Fallon driving to the mysterious town of Weeping Hollow to take care of her ailing Grandfather. Fallon’s Nanny had told her bedtime stories about the town but she wrote them off as pure fantasy and soon discovers there may be more to the stories than she thought as she tries to settle in amongst the strange residents and the Heathens.

Guys I could not put this book down! I was terrified about how the story was going to end and just knew I was going to be totally crushed!!! While this book can be read a a standalone Fiorina will be writing more stories in the same world. In the meantime I am going to go read everything else she has written to try and cure my hangover.

Once upon a time, there lived a girl named Fallon who was taken far away from home shortly after she was born.

A home that held more than strange traditions and bizarre superstitions.

Twenty-four years later, she returned to Weeping Hollow, a town she’d only heard about in stories during restless nights under a marble moon, in the middle of the night to take care of her last living relative.

They called the nosy mortician a freakshow–a ghastly thing.

They said I couldn’t go near her.

Still, there was this aching pull to Fallon Grimaldi that I couldn’t escape.

A nostalgic pull as if we’d been here before.

Once upon a time, there lived a mysterious boy named Julian with a curse as old as centuries wrapped around his soul.

He was one of the four Hollow Heathens, the very dark creatures who caused the town’s people to live in fear.

And the Blackwell name was stained with darkness and death.

They called him a monster. Cold and hollow.

They said I shouldn’t go near him.

Still, there was this aching pull to Julian Blackwell that I couldn’t escape.

A nostalgic pull as if we’d been here before.

Have you read any books by Nicole Fiorina? If so, what did you think?